As Les Voiles de St. Barth Richard Mille welcomes luxury cosmetics company Sisley as a new silver partner, it shines a light on the women who sail and skipper in St. Barth. While their numbers are fewer, they compete on equal terms with men and better yet, achieve victory, like Wendy Schmidt (Selene), Catherine Pourre (Eärendil) and Pamala Baldwin (Liquid). 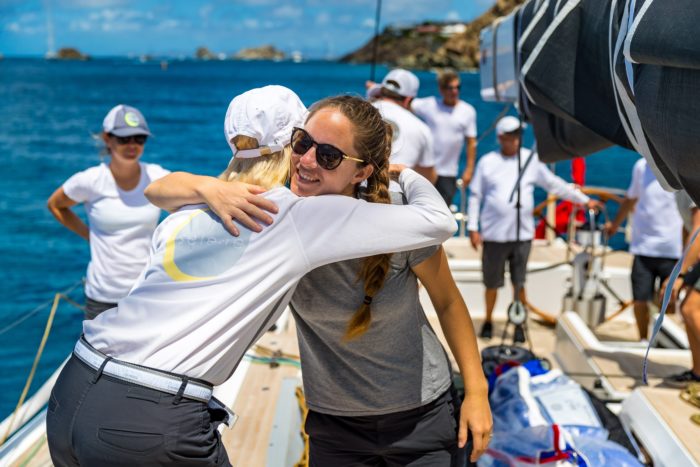 “Les Voiles de St. Barth Richard Mille is an event that I particularly like. The regatta is raced on a unique body of water, and St. Barth has such an amazing atmosphere,” said Glenny, the British sailor who has, among other things, skippered Maiden, the boat best known for its 100-percent female crew in the 1989-1990 Whitbread (now called The Ocean Race). Now, The Maiden Factor is campaigning around the world for the promotion and fundraising for the education of girls.

“Tigress has always been a small team but with great ambitions. I have always believed passionately that everyone could enjoy the pleasures of sailing regardless of their age, gender or experience,” adds Glenny, a top finisher at Les Voiles de St. Barth Richard Mille.

She is not the only female to challenge for honors in St. Barth. Others include Annie O’Sullivan on Diamonds are Forever, Sarah Waters on Hot Stuff, Shannon Mindich on Solstice (2nd in 2017), Lucy Jones on Northern Child (5th in 2016), and Kristy Hinze Clark, co-skipper of Jim Clark on the Maxi Comanche (4th in 2015 then 6th in 2016).

Three women did even better by registering their names in the regatta’s prize list: Wendy Schmidt aboard Selene in the Maxi category in 2013, Catherine Pourre on Eärendil in Class40 during the 2017 edition, and most recently Pamala Baldwin on her J/122 Liquid in CSA 4 last year.

Les Voiles de St. Barth Richard Mille is hands down my favorite race in the Caribbean,” said Baldwin, an Antigua resident. “I love all aspects of this regatta – the organizers take care of the event down to the smallest detail and with such sophistication. They do it right and do it with class; whether we are on water or on land.

Les Voiles de St. Barth Richard Mille caters so well to the big boats, which is very appealing. It’s jaw dropping to watch the Maxi boats racing and to cross with boats like mine. Yet, as we all return to shore there is a true camaraderie rather than a rivalry. St. Barth and the event have such a good vibe and something for everyone. They absolutely nail it. If I had to pick one regatta that I could do, it’s this one.”

Baldwin has not missed an edition since 2016, and after winning her section in 2019 she plans to return to defend her title. She knows that the competition promises to be tough during this 11th edition, in particular with the arrival of new competition, like Morgane Ursault-Poupon.

Ursault-Poupon is the skipper of the Class40 Up Sailing – United for the Planet, and has distinguished herself on the most prestigious races in the last two years such as the Route du Rhum and the Transat Jacques Vabre. Thanks to her family connections Les Voiles de St. Barth Richard Mille is a regatta already close to her heart, and she is excited that her schedule finally lined up to participate in this year’s edition.

It all finally came together!” said Ursault Poupon. “I am very happy especially since it was my uncle, Luc Poupon, who created the event and who continues to co-organize it today with François Tolède. After the Transat Jacques Vabre, I did, in fact, take my Class40 in the West Indies. This year I also plan to participate in the Heineken Regatta, and then in the Atlantic Cup before continuing with the Transat Quebec St-Malo to return to Europe.”

Joining Ursault Poupon for the Caribbean season is Rémi Lhotellier, one of her loyal teammates, and Louis Duc, who finished fifth in the last Route du Café in duo with Aurélien Ducroz in Class40.

The prospect of racing at the highest level on the incredible waters of St, Barth is obviously exciting,” said Ursault-Poupon, who is looking forward to the regatta’s tough competition, whether that be male or female.