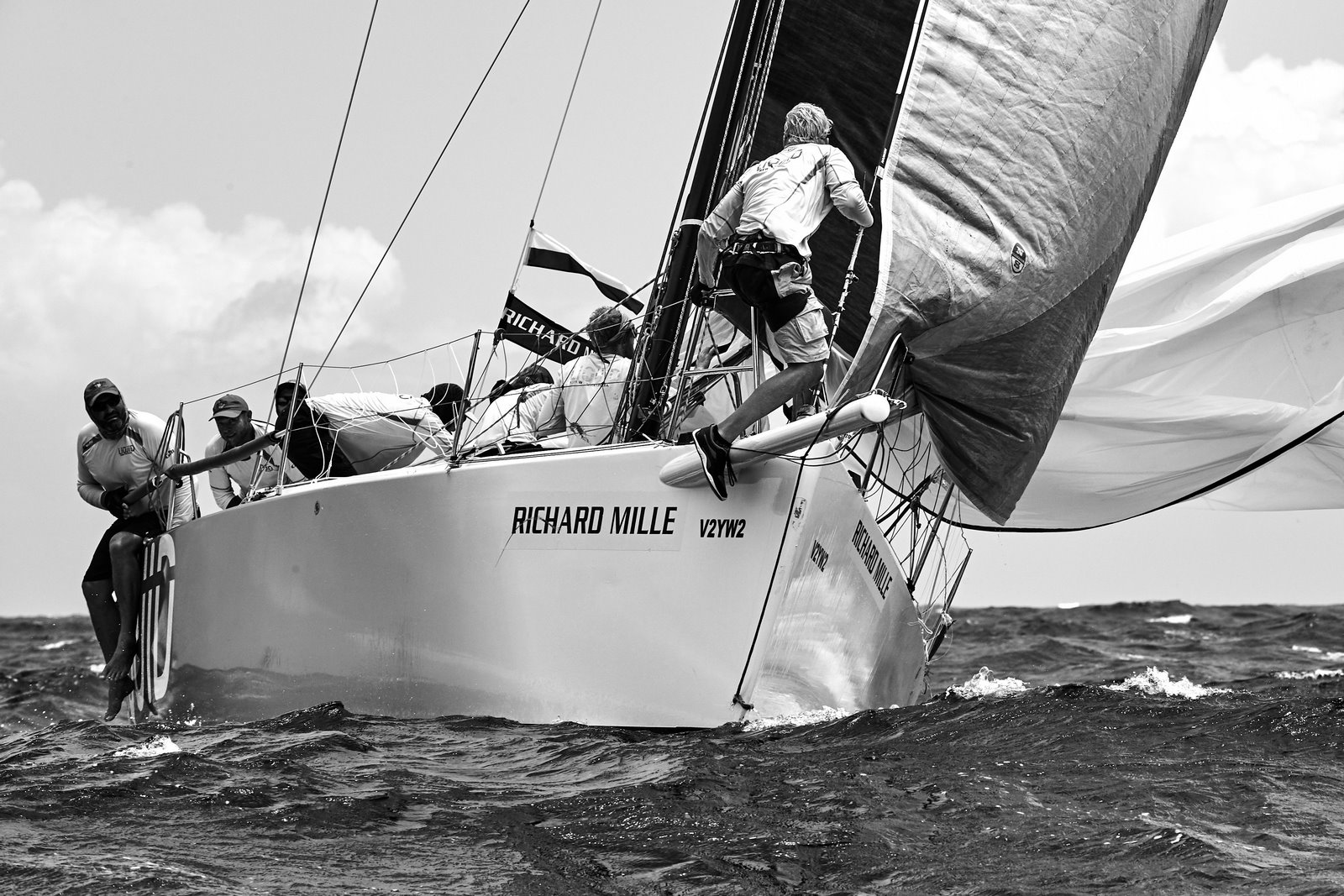 In Saturday’s final act for Les Voiles de Saint-Barth Richard Mille, the 25 – 27 knot winds with gusts in the low 30s and big seas, took their place on center stage to create a spectacular finish for the 9th edition.

The Maxi and Multihull classes raced 28 miles, while CSA 1 and 2 covered 22 miles, and CSA 3 fought it out over a course of 18 miles. These robust conditions were helpful to some and complicated life for others, resulting in some major changes in the standings. Yet at the end, there were seven great winners that sailed to glory.

If this fifth and final day of competition for Les Voiles de Saint-Barth Richard Mille 2018 started a little later than planned due to waiting out a few isolated rainstorms, it kept its promise for serious battles all along the way.

The weather conditions did not inhibit the enthusiasm of those boats for which today was all-to-play to determine the final victors. One good example is the incredible duel that took place between Proteus and Sorcha in the Maxi 1 class. These two 72-footers jockeyed back and forth from the beginning to the end of the race, finally finishing less than a minute apart.

The advantage went to George Sakellaris and his crew aboard Proteus, adding their name for the third consecutive time to the winner’s circle for Les Voiles. Adding to the thrill of victory, Proteus also won the Richard Mille Maxi Cup (see below).  Rambler 88 finished the day’s race in third, and cemented their second place overall.

The combat was also pretty intense in the Maxi 2 class, and especially between Aragon and Windfall; at the start of today’s racing they had an equal number of points.

“A sense of déjà vu,” noted Olivier Douillard, tactician aboard the Marten 72 belonging to the Verder and Van Nieuwland famliies, who found himself in exactly the same situation as during the 2017 edition, and hoped that this time the game would be his to win.

No such luck. The victory ultimately went one more time, to Irishman Michael Cotter and his Windfall team, after an incredible day of racing.

Same story, with even more drama, for Flow in the OMA class: in this case all of the boats were possible contenders for the podium as they left for the starting line. They had to wait for the last moment and the final calculations for the winner to be decided. Flow edged out R-Six, and Nala captured third place.

In OMA, Guyader had the top spot locked up, with Phaedo and Morticia battling it out to determine second and third overall. Thanks to the Gunboat 66’s first place finish in the race, they edged out the modified Sea Cart 30 to take home the silver.

Suspense Right To The End

The same scenario played out for the CSA 3 class where it was up to Crédit Mutuel-PTO and Team Island Water World to see who would finish on the top step of the podium. Despite a wrong turn on the course and a broken halyard, Credit Mutuel-PTO led by Claude Granel and Marc Emig took the advantage at the finish line. The end standings tied the two boats at 14 apiece, but their final bullet gave them the needed edge.

“It was disappointing for us, but the rules are the rules, and they stipulate that in case of a tie, it’s the last race that counts,” said Team Island Water World’s Frits Bus, with a note of regret as he would have liked to have won in the CSA class, like he had on his Melges 24 twice in prior editions.

“He really gave us a hard time this week,” relates Emig, who is proud that he and his team won their fourth victory in Les Voiles de Saint Barth, equaling the number of wins as Rambler.

The tension was considerably less palpable in the CSA 2 and CSA 1 classes where Ventarron and Conviction, respectively, had already confirmed their victory before the last round, and each ended the day cementing their string of first-place finishes.

The day’s intense conditions impacted more than a few boats. Gordon’s and Speedy Nemo both retired following problems with their spinnakers, and ‘Les Voiles Presque au Féminin,’ called it a day after their number-one sailor fell into the sea (recovered safely).

Saturday’s incredible conditions put the perfect finishing touch on an incredible week of competitive racing, leaving the sailors smiling and with plenty to talk about as they enjoyed the awards ceremony and fireworks display before adventuring off to explore the Saint Barth nightlife.

Not surprisingly, all of the crews present this year are already talking about returning for the 10th edition of Les Voiles de Saint Barth Richard Mille. The organizers announced they moved the regatta one week later, April 14 – 20 so it takes place during the Caribbean low season. This decision will help our sailors in two ways: more availability to housing and in the marina, and most important, this means low-season rates, which reduce by 30 percent or more. See you next year!