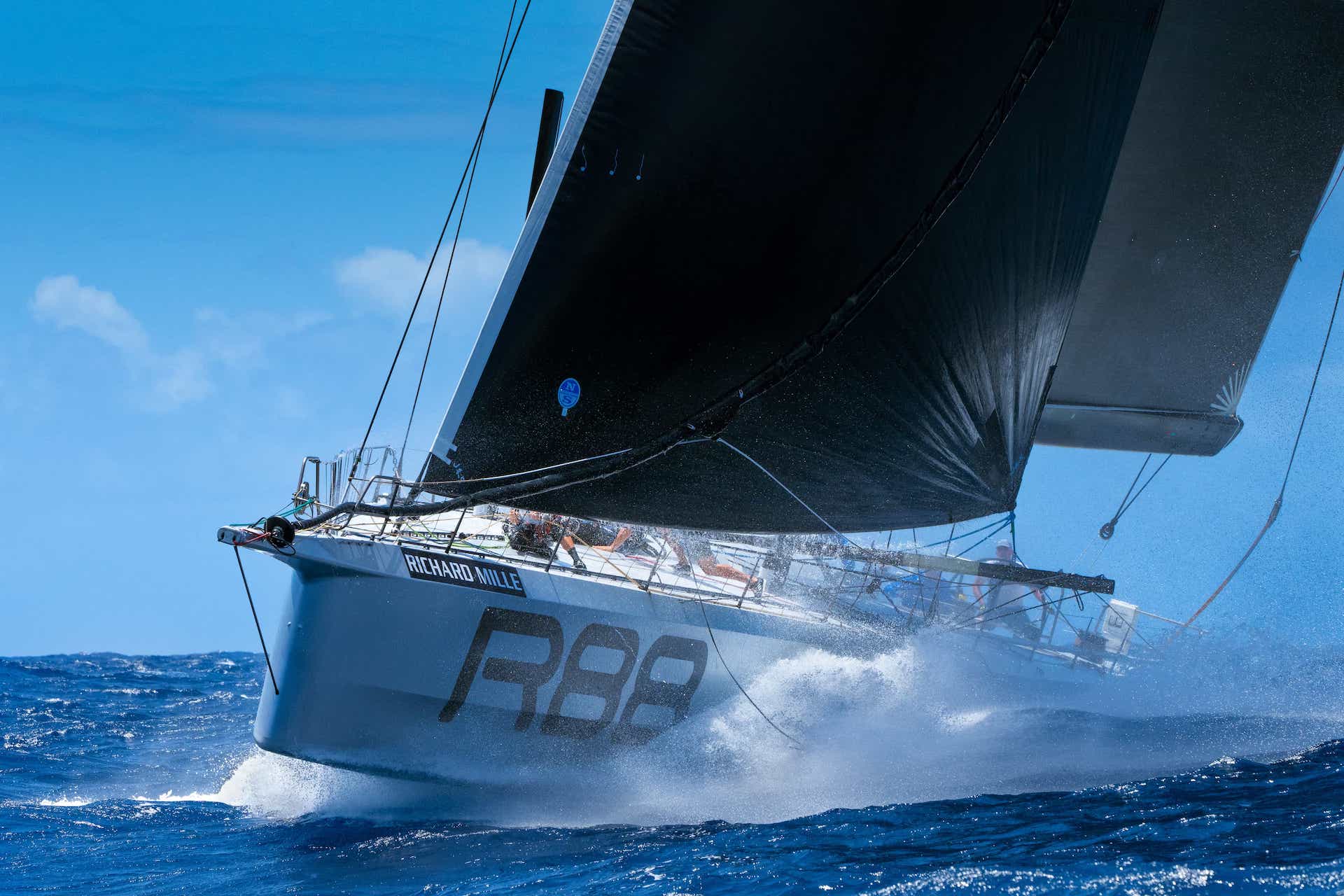 This Wednesday, the third day of competition for the 11th edition of the Voiles de Saint Barth Richard Mille, the maxis had an appointment for the Richard Mille Record Trophy with one objective: to break the 2018 time over a 47-mile course between Saint Barth and Saint Martin. Propelled by the easterly trades blowing between 15 and 20 knots, Rambler 88 finished first but missed beating the record they established in 2018 (3 hours 01 minute and 58 seconds) by 16 minutes.

The other classes (Offshore Multi, Multihull CSA, CSA 1, 2, 3, 4, 5 and 6 then the Diam 24 OD) raced around-the-island courses, with the majority of leaders continuing to solidify their positions at the top of the leaderboard.

“If it was yesterday I think we would have broken the record, but we needed another five knots of breeze to make that happen,” said Brad Butterworth, Rambler 88’s tactician. “That, plus the sailing angle down to Saint Martin was a little bit wide for us, coupled with conditions right in the ‘grey area’ between sail choices. But, that’s sailboat racing; and it was still a great day sailing.”

In his fourth time racing here at Les Voiles, Jim Madden’s Swan 601 Stark Raving Mad VII so far has a clean sweep across CSA 3. But, Madden isn’t taking anything for granted given the challenging conditions. “So far so good, and there is a little bit of luck involved,” he says. “But between the waves and the chop, the shifty and puffy winds, you can wipe out pretty easily. 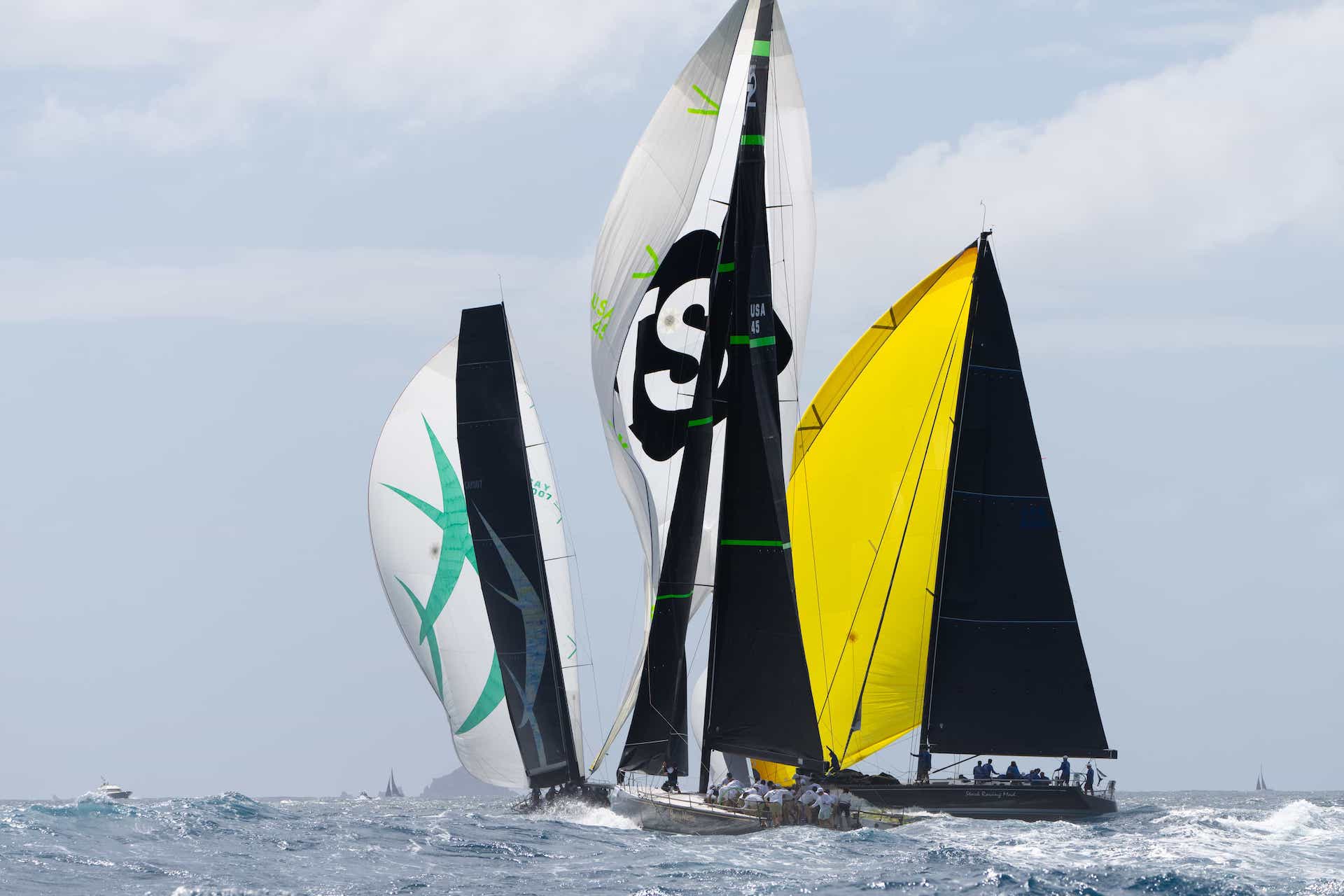 “As you come nearer the finish and closer to Saint Barth, the wind is incredibly shifty. It can literally be a 30-degree difference within 100 yards of two boats. And then it’s like somebody throws a switch and it shifts again so the boat does an auto tack.”

Should the forecasted lighter winds come to fruition for Friday and Saturday, Madden says they could have their work cut out for them. “If the conditions lighten and the sea state settles down we are pretty comfortable. But if it’s still lumpy and there is not as much breeze, that will be tough. We are a heavy boat, that won’t be fun; it will be very challenging for us.” 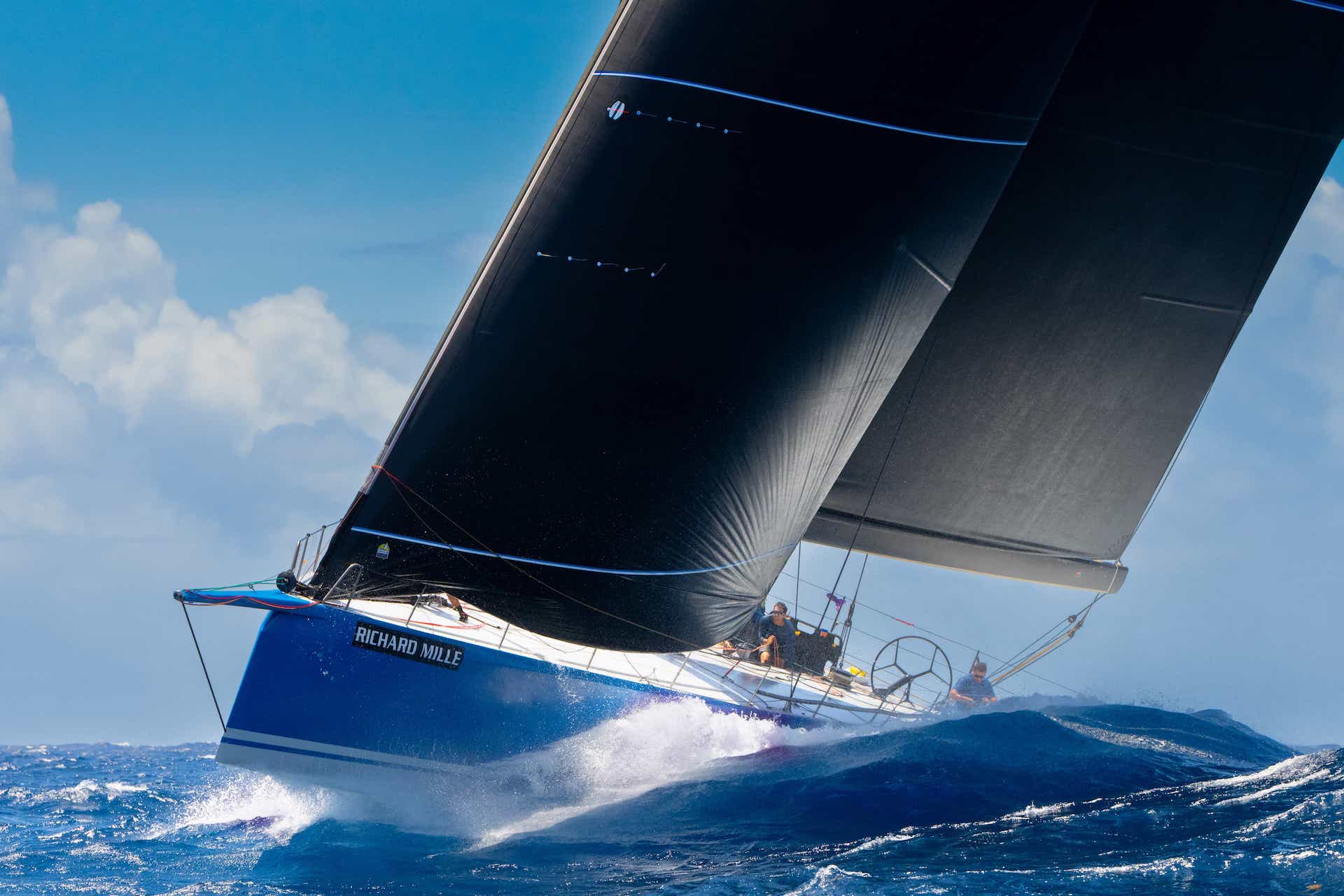 “The conditions were good today, but quite difficult,” said Ramis. “During the first beat up to Salines, the wind was very unstable, both in strength and in direction. The reach that followed was not easy to manage because of the sea state – we were covered many times by waves. It was a big mess but after Coco’s passage [east side of Saint Barth], we managed to set the spinnaker and had a great time surfing downwind.”

“We took advantage of very nice conditions for the round the island race today and since the crew had drunk less than on the other days, it was better!” he laughed. “It was a very tactical race and our tactician Lionel Péan did a great job sending us to the north between the islets before we turned downwind for a great ride. 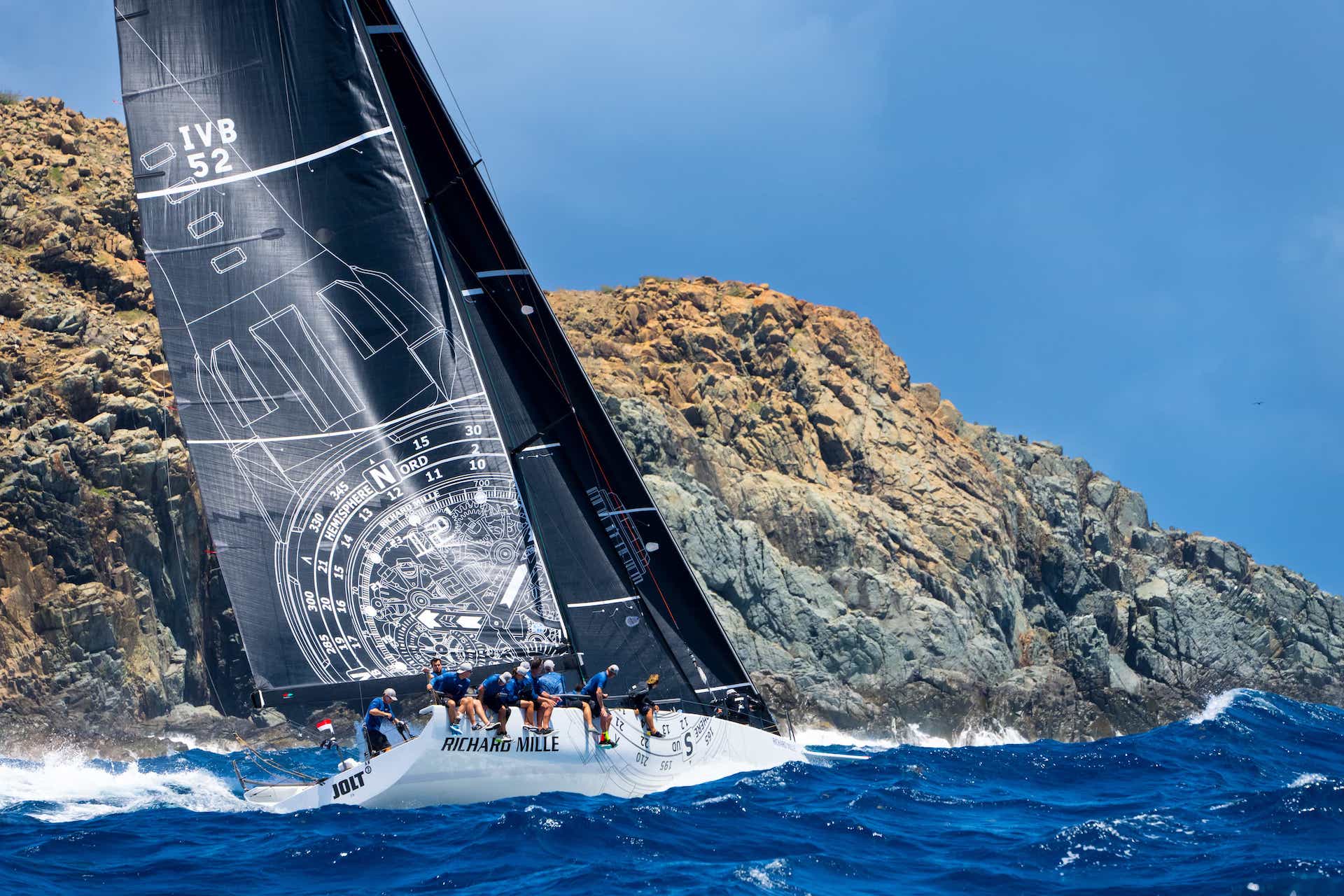 “We had hesitated a little to put the big new spinnaker up the two previous days, but it was a success. Team Arawak is going very fast and it’s led by guys who know the area well. We are obviously happy to have finished ahead of them and that motivates us to beat him again on Friday and Saturday!”

Tomorrow is the regatta’s signature Day Off at Nikki Beach. Racing resumes Friday, and concludes Saturday. 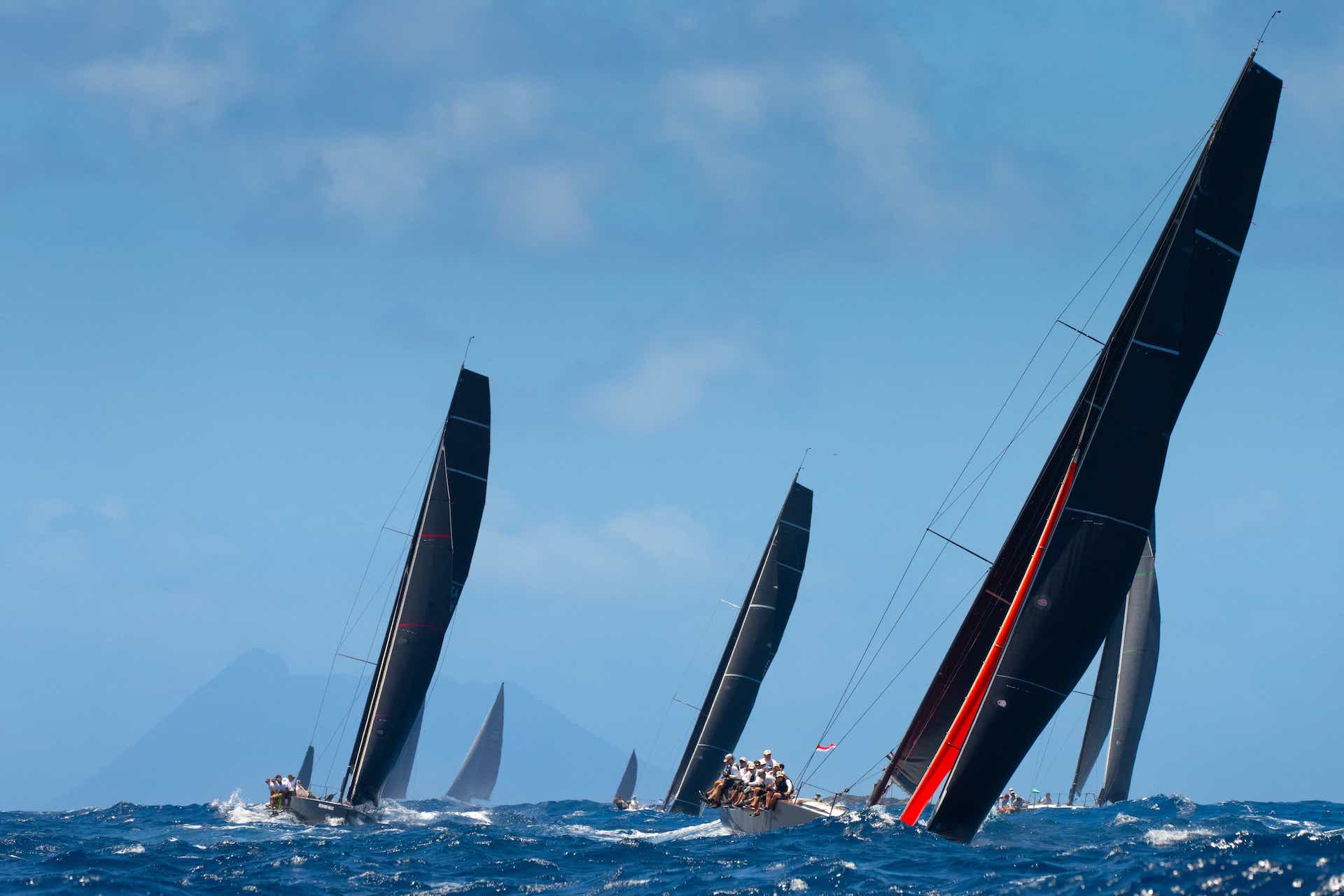