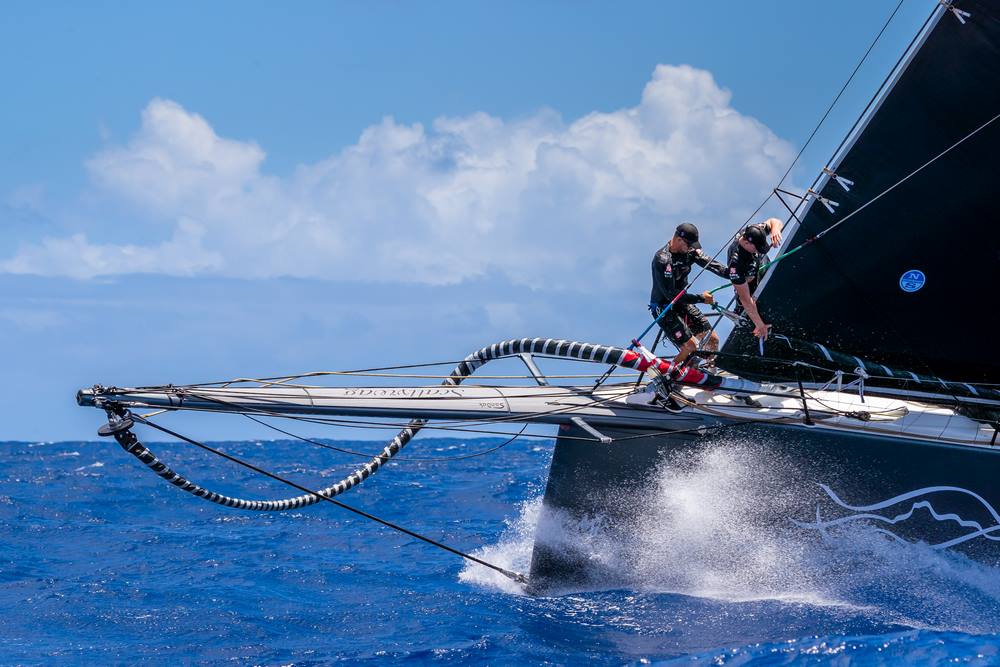 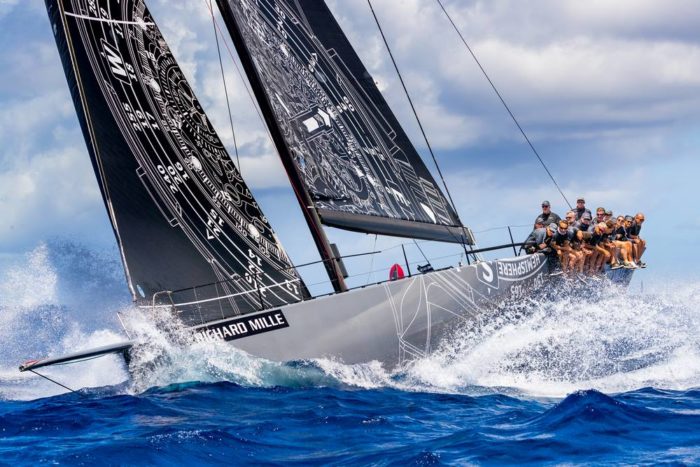 One of three classes to set the standard, Peter Harrison’s Sorcha led the Maxi 1 class the entire way, followed by SHK Scallywag, the Dowell 100 skippered by David Witt; and Ambersail, Saulius Pajarskas’ Volvo 65.

Clark admitted the team was really looking forward to racing against the new Bella Mente to gauge the season. “But unfortunately, they had an issue with their mast and had to withdraw before racing began which was a real shame. Now we will wait until September to line up against them.” 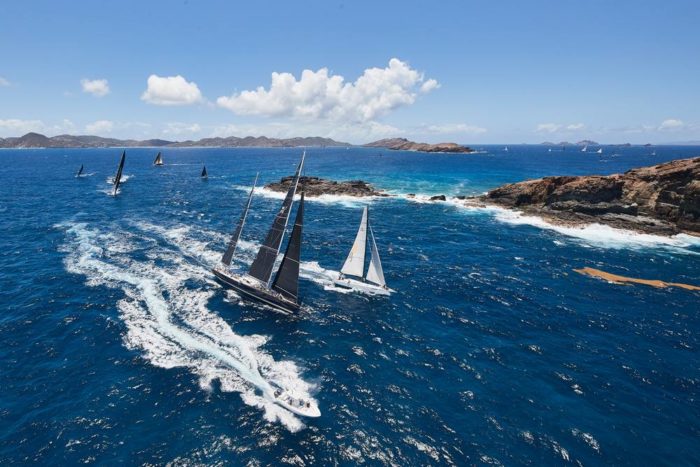 In his third Maxi 2 victory in as many years, Windfall’s Michael “Mick” Cotter humbly attributes much of their success to luck. “We got lucky several times,” said the Irish owner. “We had a great tussle with Sojana all week. Twice coming into the finish, we were touch-and-go with them, but we managed to get around her.”

Cotter, who has done seven Les Voiles, wondered how they may have fared if Selene had been able to race the whole regatta. Selene, Wendy Schmidt’s Swan 80, retired after a collision with Caro on day two of the event. “She looked like she was going to be the boat to beat,” he said.

Switzerland’s Franco Niggeler thoroughly enjoyed his first Les Voiles aboard Kuka3, a Cookson 50. “I am happy because we had a wonderful regatta in a wonderful place and when you come in first, it always feels good,” he said.

He said they had to really earn today’s race. “Racing today was quite complicated because we didn’t have a great start, and then had to fight a lot with Triple Lindy, the other Cookson. In the end we deserved the win because we had good maneuvers, and we have a good team.”

In Andy Berdon’s first Les Voiles, he and his close-knit team will bring home the CSA 2 crown with a perfect record across six races. New teammate Stu Bannatyne is no stranger to the Les Voiles stage; last year he stepped up with overall winner Proteus.

“It’s really nice to have a solid team that has sailed together before,” said Bannatyne, four-time Volvo Ocean Race winner. “As tactician and coach of the team, it’s nice that throughout the week I could challenge the crew with aggressive sail changes and such. They responded brilliantly, and it made a big difference for us.”

Berdon proudly pointed out that, “Today, just 2min 45 seconds before the start our #1 genoa fell apart. In the middle of the start sequence we had to change jibs and we were still able to cross the line right on time and in good shape. We had the experience to be able to adapt.”

“This year was our 8th time at Les Voiles de St. Barth this year and probably the best,” said Sagramoso, the Puerto Rican skipper. “The conditions were absolutely perfect all week and it’s incredible to win all six races in our class, but it was also great to watch the close match Phan and Kick ’em Jenny. We will definitely come back next year!”

Pamala Baldwin, owner of the J/122 Liquid, frequently races the Caribbean circuit but until this regatta hadn’t quite cracked the top of the podium. She added Mike Giles as tactician and coach to complement the young talented team, and according to Baldwin, “It was the final piece we needed to complete the winning puzzle. My heart is filled with joy.”

Giles has raced almost every Les Voiles in the Maxi class, and really enjoyed his time in the smaller boat fleet. “In this fleet there are no “gimmies’ — it’s an incredibly competitive class with close racing,” the South African said. “The racing is just as tough, if not harder than when I’m in the Maxis.”

When Berrit Bus and Stephanie Rovive discovered they won today’s race they let out a whoop and high five’ed each other. The teammates from the small but mighty Melges 24 Team Island Water World had been nipping at Credit Mutuel – SGS heels all week with a string of second-places finishes, and today they snatched their only victory by just four seconds (corrected time) from their Martinique competitors.

“We had great starts every day; it’s just that Credit Mutuel – SGS has a better boat for the conditions. It was great racing,” said Bus, who sails on Team Island Water World with her father and skipper Frits Bus.

Marc Emig, co-owner of Credit Mutuel – SGS noted that he has never won a regatta by winning every race. “I would have loved a perfect record. To lose that last race by just four seconds! This is our fifth win at Les Voiles, but losing a perfect record just means we have to come back and try again.”

Multihull IMHRR
Despite a not-great start today and then their newly repaired spinnaker exploding immediately after, Multihull IMHRR class winner Guyader Gastronomie battled back to finish today’s race in second place and with a comfortable six-point lead over 2nd place Hallucine, and Arawak-Team Spellbound in 3rd place overall.

However, skipper Christian Guyador noted that may not have been the case if Hallucine, skippered by Regis Guillemot, hadn’t been disqualified on day two. “We obviously took advantage of Hallucine’s disqualification, but we also sailed a very good regatta this week,” Guyador said.

“We are very happy to achieve the repeat victory. That was our goal this year at Les Voiles, and it’s mission accomplished.”

This is Greg Slyngstad’s sixth time racing in Les Voiles, and he couldn’t have ordered up anything more perfect for his custom-designed Bieker 53 multihull. “Fujin does best in 16 – 20 knots and we were in that range all week,” he said.

He’s pleased with how Fujin overcame a capsize and dismasting in the 2018 Caribbean 600, which resulted in a complete refit. “This is the fourth regatta back, and she is as good or better than before.”

His wife Mimi, and longtime Seattle friends Fritz and Tina Lanzinger raced this week, led by “brain trust” and tactician Jonathan McKee, two-time Olympic medalist. “We have a great crew, and a great time sailing together,” Slyngstad said.

Flow, Stephen Cucchiaro’s Gunboat 60 finished today and the overall class in 2nd place, tied on points with R-SIX, the Polish entry of Robert Szustkowski and Robert Janecki, in 3rd place. 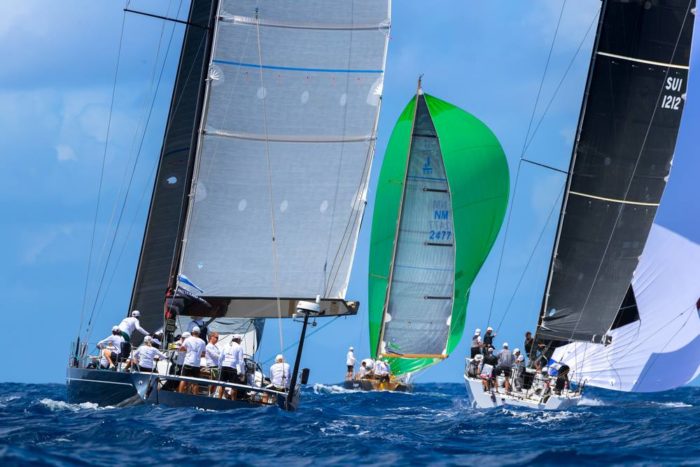 – The 2020 Les Voiles de St. Barth Richard Mille is planned for April 12 – 18, 2020.
– * The winter of the Richard Mille Maxi Cup Trophy brings home the coveted RM 60-01 Flyback Regatta Chronograph. Powered by an RMAC2 grade 5 titanium automatic caliber with 55 hours of power reserve, a variable inertia balance and flyback chronograph functions, annual calendar, large date and UTC, the RM 60-01 makes navigation easier thanks to with its special rotating bezel, punctuated by the four cardinal points and a 360 degree graduated disc with a 24 hour scale. It stands out from other navigation watches by its ability to steer, without additional calculation, on the northern hemisphere as well as on the southern hemisphere.